Another key assumption found in all Oxfordian argument is that the plays contain detailed knowledge of the law, which could only have been gained by study and practice. Once again, however, the evidence weighs equally against both Shakespeare and Oxford without any need to analyse the many simple errors of fact in the legal references in the plays. 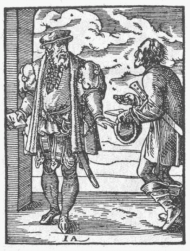 There is no record that Oxford ever did more than dine at Grey’s Inn.  If legal training was required to write the plays, there’s no more evidence for Oxford’s legal background than there is for Shakespeare’s.  Oxford was admitted to Gray's Inn with three of Burghley's wards when he was 17. Unlike the other three, Oxford spent no money on law books and only one of them, Robert Carr, paid any chamber rent. Not a distinguished career.

Oxford did, however, have a serious brush with the law shortly after his enrolment when he killed one of Burghley's servants and narrowly escaped a murder charge.

Oxford was constantly at odds with the law and involved in some suit or other, often trying to reverse previous suits of his own by recovering assets he had realised for cash. Oxfordians scoff at the paltry nature of the suits that tie Shakespeare into legal records. However, whilst it cannot be denied that Oxford did have a prominent career as a jurist, the evidence of any competence or legal expertise is non existent. And his legal entanglements reveal an incompetence in the management of his own affairs that starkly contrasts with the reputation his supporters try to build for him.

For pity is the virtue of the law,
And none but tyrants use it cruelly. (Timon of Athens, 3.5.10)

In the years between leaving Stratford and reappearing in London , Will could have turned a penny at many activities, such as clerking for a lawyer. We know from his legal disputes that he must have had plenty of contact with lawyers and from one or two remarks, we can probably tell that lawyers bills were just as outrageous in his day as they seem to be now.

Apart from speculation, however, there is some contrary evidence that Oxford was either ignorant of the law or had forgotten most of his Latin.

When he uses legal Latin in his letters he commits schoolboy howlers. Writing “summum totale” for “summa totalis” is pretty much the equivalent of “alls them stuff what I used to got.” You can read all of Oxford’s extant letters on Professor Alan Nelson’s website.

The idea that either Shakespeare or De Vere ever opened a law book with a serious intent to study has no factual support.

Nor is it supported by analysis of the work.