On the Date, Sources and Design of Shakespeare's The Tempest

This book is not about The Tempest.  Not a word of it.  It’s all about Stritmatter and Kositsky’s desperate need to claim the great prize of its authorship for the god of their idolatry:   a tragic, unacknowledged genius whose apotheosis their book will bring about.  His name?  Roger Stritmatter, Lord of Coppin.

Whose name is demurely absent from their text, save once.  Not in their own words but in Gail Kern Paster’s:  which are by far the best thing in the book:

For well-schooled professionals ... the authorship question ranks as bardolatry inverted, bardolatry for paranoids, with one object of false worship (Shakespeare) replaced by another (Marlowe, Bacon, Edward de Vere). To ask me about the authorship question, as I’ve remarked on more than one occasion, is like asking a paleontologist to debate a creationist’s account of the fossil record.... For much worse than professional disclaimers of interest in Shakespeare’s life is the ugly social denial at the heart of the Oxfordian pursuit ... a ferociously snobbish and ultimately anachronistic celebration of birthright privilege.

She speaks as an Ariel against the would-be usurpers, who would seize Will Shakespeare’s kingdom of the stage, his very name:

You fools! I and my fellows
Are ministers of Fate: the elements,
Of whom your swords are temper'd, may as well
Wound the loud winds, or with bemock'd-at stabs
Kill the still-closing waters, as diminish
One dowle that's in my plume: my fellow-ministers
Are like invulnerable.

As for this pusillanimous Sebastian and Alonso—if you didn't know their secret mission, you'd never guess why they keep harping on 1603.  There’s no reason at all for their redating of The Tempest—except that their precious Oxford died in 1604.

Like all good creationists, they try to argue a gap in the fossil record, assailing the True Reportory of 15 July 1610 with a storm of sophistry.  (All of which Thomas Reedy has patiently refuted; all of which they’ve redoubled.)  They don’t budge it an inch.

Even if the Strachey letter had never been found, we could still date The Tempest to around 1609-1611.  It belongs with The Winter's Tale and Cymbeline: they share a stratum.  All the evidence for all three plays converges:  their incomparable, distinctive language; their concerns; the new fashion for tragicomedy and pastoral romance; the Revels records of performances; allusions by Simon Forman and others; the timing of Inigo Jones’s and Robert Johnson’s court careers; their use of candlelight and interval, of masque and music and of intimate space.  Not to mention such odd matters as the reappearances of satyrs’ dances and of white bears.

Those Oxfordians trying to unravel The Tempest from the Blackfriars age must untangle it from Cymbeline; from The Winter’s Tale (bear-anchored); from Two Noble Kinsmen and Pericles (co-authored); from lost Cardenio, whose source is Don Quixote (1605).  Or they must try to rip out the whole patch of late plays and Frankenstitch them onto Oxford’s work, where they look alien indeed:  iridescent, black and bright at once, against his drab.

It can’t be done.  Not with any long-forgotten wreck, dredged up.  Not with thimble-rigging the sources.  Not with cries of victory in a non-existent game.

Stritmatter and Kositsky would have done better trying to move Oxford’s date of death.  They’d still be left with a sow’s ear of a poet, but at least he’d’ve had a pulse.

The Tempest is of the period 1609-1611, with all its anxieties, crazes, innovations, and hopes, as much as "White Rabbit" is of 1967. You can't move that back to 1958, however desperately you want it to be Buddy Holly’s.  (This comparison is unfair to Buddy Holly, who is Gorboduc at least:  full of primitive energy and innovation.  Oxford is more like some long-forgotten society band leader, a footnote to the history of everything.)

So, other than making a dog’s breakfast of the Jacobean Zeitgeist, what’s up with this book?

They’ve decided that a lost play performed on Shrove Monday 1605, A Tragidye of The Spanishe Maz, was really The Tempest in disguise.  Of course:  alone of the three plays performed that week, it doesn’t have “Shaxberd” written next to it, it’s explicitly Spanish, and it’s called a tragedy.  Makes perfect sense.  They’ve shoved in some corroborative fiddlestick on Shrovetide ritual drama and symbolism.  (I wonder what Ronald Hutton would think of their arguments?)  Sadly, it’s all ink-horn stuff—it smells too much of that writer Metamorphosis.   The artificial reading of the play which they impose on it has nothing to do with Shakespeare’s understanding of folklore, which is green and living.  It springs from his very roots:  so is earthier.  And the native English Shrovetide customs were pancakes, mob football, and the cruel sport of cock-thrashing.   So the Clown in All's Well That Ends Well has an all-serving answer fit “as Tib's rush for Tom’s forefinger, as a pancake for Shrove Tuesday, a morris for May-day.”1

Stritmatter and Kositsky have rewritten Shakespeare as a Holofernes.  Without a shadow of a shade of irony, they have remade him as a mirror of themselves (as they fondly imagine themselves):  as a mirror of their re-imagined scholar-Oxford.2  Their Tempest is a thing of pedantry, a courtly coterie play:  all masque and no innyard.  It would never have played to the pancakes-and-football mob—as Shakespeare’s Tempest (all but assuredly) did.  The King’s Men’s intent was to please all:  Blackfriars, Whitehall, the Globe, and the provinces.

They assert that Jonson, Chapman, and Marston’s Eastward Ho (1605) is a parody of The Tempest.  Of course:  there’s a comic shipwreck in it, on the Isle of Dogs.  There are some astoundingly tin-eared attempts at close reading in this book; but their Table 9.6 cloud-caps them all.   It sets Prospero’s great “Our revels now are ended” side by side with the Eastward Ho epilogue.  There is “pageants” in both.  Whoop-de-do.

That’s not how Ben Jonson snarked at Shakespeare:  when he disdained a thing, he said so (sufflaminandus erat).  What irked him about The Tempest was Will's craze for the fabulous.  Here’s the man in his Bartholomew Fair (1614), speaking through his Scrivener to his audience:

“If there be never a Servant-monster i' the Fair, who can help it, he [i.e. Ben Jonson] says, nor a Nest of Antiques? He is loath to make Nature afraid in his Plays, like those that beget Tales, Tempests, and such like Drolleries, to mix his Head with other Mens Heels; let the concupiscence of Jigs and Dances, reign as strong as it will amongst you:  yet if the Puppets will please any body, they shall be entreated to come in.”3

That first audience was at the Hope, “as dirty as Smithfield and stinking every whit,”  as it was used indiscriminately for plays, bear and bull baiting, and whatever catchpenny entertainments Henslowe could devise.  Yet Jonson expected them to get his digs at The Winter’s Tale with its leaping satyrs  and The Tempest with its servant-monster; to see its solemn revels—the descent of gods—as a puppet show.  Ben knew that this scurvy crew of groundlings would have seen those plays—and seen them pretty recently.  You don’t do this kind of stand-up satire on things ten years out of fashion.  Not if you want laughs—and  pennies—from your crowd.

Remember as well that theatre is a conversation.  Consider that Will Shakespeare may have answered Ben’s Alchemist with his Tempest, and that in 1610-1611 Burbage would have played both Subtle and Prospero, the false mage and the true.

In short?  On the Date &c. is a grand fanfaronade of Oxfartian wind against a mountain of evidence:  which stands.

Or to put it in good Shrovetide terms, a cock-thrashing.

1. It’s odd that the authors don’t quote this:  it’s one of just two references in Shakespeare to Shrovetide, and rather well-known.

2. Sadly, their beloved Cloten was—almost certainly—far less well educated than Stratford Will, save in dancing and swordplay.  Grammar school was hard practice.  What they taught (nine hours a day in summer, seven in winter) was grammar and rhetoric:  exercises and examples in the art of writing.  Oxford got two hours a day of Latin, a quarter of the Stratford schedule—and it shows in his style.  That poverty and gracelessness reveals a lack both of talent and of training.

3. They didn’t catch this one, either.

In some places, Shrovetide customs haven't changed all that much since Shakespeare's (and Brueghel's) day.

There are still communities in England anxiously awaiting the disappeareance of the Shrovetide Football Match tradition, for example. 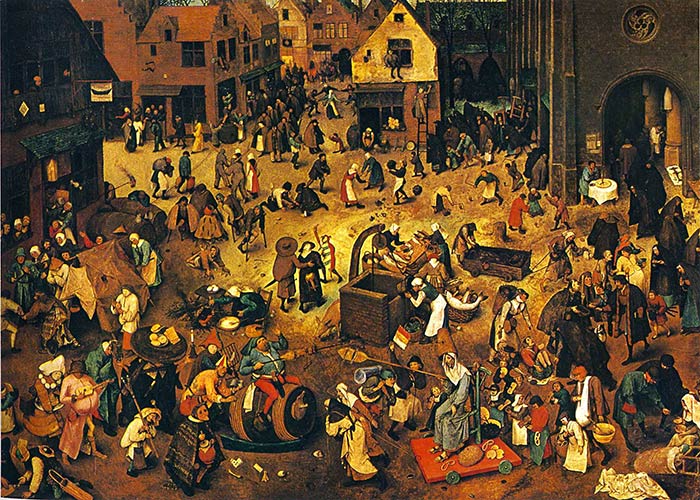 On the Date, Sources and Design of Shakespeare's The Tempest