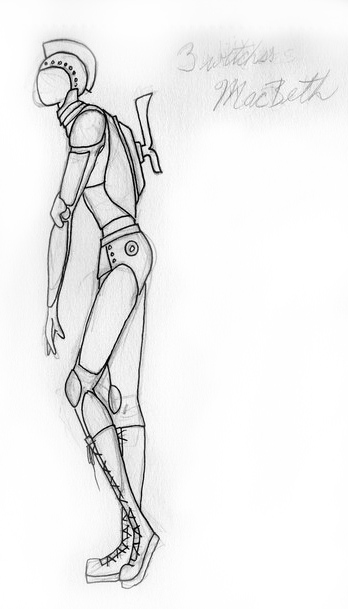 Additional information (revision): because it is theorised by some scholars that the Folio text of Macbeth shows signs of revision, dating the play can be difficult. Macbeth is extremely short for a Shakespearean tragedy, and it is thought that F1 may have been set from a prompt book that had been shortened for performance, rather than from Shakespeare's own foul papers. First suggested by W.G. Clarke and W.A. Wright in their 1869 edition of the play for Clarendon Press, the most likely person to have carried out the revision is Thomas Middleton.[317] The play is listed in the Oxford Shakespeare: Complete Works as "The Tragedy of Macbeth by William Shakespeare, Adapted by Thomas Middleton,"[318] and its date is recorded as "1606; adapted 1616." Middleton is conjectured to have written 3.5 and much of 4.1; the only scenes which feature Hecate. The nature of these scenes suggest revision as opposed to collaboration.[319] The main reason Middleton's name is attached to the conjectured revision is because 4.1 calls for the use of two songs from The Witch, a play by Middleton himself.[316]However, Middleton's involvement with the play, and the notion of revision work itself, is not universally accepted. Two notable scholars who dissent from this theory are Jonathan Hope[320] and Brian Vickers.[321]
Evidence: the play is closely connected to King James, and scholars are in general agreement that it is unlikely to have been written prior to his accession in 1603. He considered Banquo his direct ancestor, and eight Stuart kings preceded James, just as Banquo is depicted at the end of "a show of eight kings" (4.1.126.1-2).[318] In 1790, Edmond Malone dated the play 1606, and the majority of scholars still accept this date even whilst acknowledging little conclusive evidence exists, other than the fact that it 'seems' correct in the context of Shakespeare's other work of the period.[322] There are some possible topical allusions, however, which do support a date of 1606. For example, the Porter's mention of "an equivocator that could swear in both the scales against either scale" (2.3.7-9) is a possible reference to the Gunpowder plot, specifically the trial of Henry Garnet in March 1606.[323] Furthermore, the Weïrd Sisters' account of The Tiger (1.3.8-26) is thought to allude to a ship of the same name that returned to England on 27 June 1606 after a disastrous voyage in which many of the crew were killed by pirates. At 1.3.22-23, the First Witch says "Weary sev'n-nights, nine times nine,/Shall he dwindle, peak, and pine." The real ship was at sea 567 days, the product of 7x9x9, which has been taken as a confirmation of the allusion.[324] If this theory is correct, the play could not have been written any earlier than July 1606. In his 1997 edition of the play for the New Cambridge Shakespeare, however, A.R. Braunmuller finds the arguments for topical allusions inconclusive, and instead argues for a date closer to James' accession in 1603.[325] From a stylistic perspective, a metrical test and colloquialism-in-verse test place the play after Lear and Timon but before Antony and Cleopatra, although Ants Oras' pause test places it before all three plays. A rare word test places it closest to Troilus and Lear.[326] 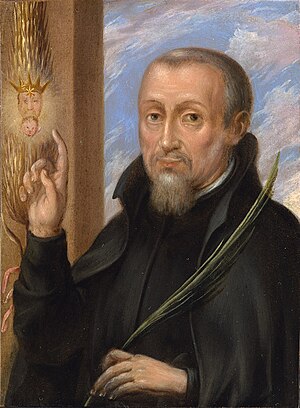 Henry Garnet, executed for his involvement in the Gunpowder Plot,
and possibly referred to by the Porter in Macbeth.

Titus Andronicus 1591–1592 In Shakespeare in Love, the young John Webster claims that Titus is his favourite Shakespeare play and he wasn't the only one. Elizabethan audiences loved the extreme violence and social historians soometimes… go to article

Macbeth is a Jacobean play, through and through. It celebrates the accession of James VI & I, and his descent through a true line of  Scottish kings, foreseen to “stretch out to the crack of doom.” In the vision… go to article