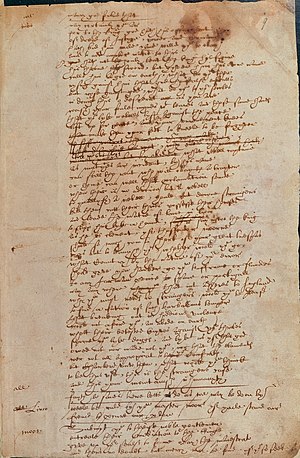 MS page of Sir Thomas More, believed to be in Shakespeare's handwriting.

First official record: in the diary of Thomas Hearne, on 17 January 1728. Hearne wrote "On the 12th of Oct. last Mr Murray lent me a thin folio Paper MS done or sowed up in a Vellum Cover; on wch it is intitled, The Booke of Sir Thomas Moore. This I have read over. It is wrote in the nature of a Play or Interlude, soon after his death, I believe. Tho' it appears from thence plainly, what a great, wise, good and charitable man Sir Thomas was, yet there is no particular of History in it, but what we know already. It is the original, being in many places strangely scored & in others so altered that 'tis hard to make some things out."[232]
First published: 1844, edited by Alexander Dyce for the Shakespeare Society. Published under the name Sir Thomas More, A Play; now first printed.
Additional information (attribution): that Shakespeare was involved in the composition of Sir Thomas More is now generally agreed upon.[233] The first major scholarly edition of the play was published by Manchester University Press in 1990, under its "Revels Plays" banner, edited by Vittorio Gabrieli and Giorgio Melchiori. In 2011, the Arden Shakespeare also published a full scholarly edition, edited by John Jowett (who had also edited the play for the 2nd edition of the Oxford Shakespeare: Complete Works in 2005), The Revels Plays edition is subtitled "A play by Anthony Munday and Others. Revised by Henry Chettle, Thomas Dekker, Thomas Heywood and William Shakespeare." The Arden edition includes the subheading "Original Text by Anthony Munday and Henry Chettle. Censored by Edmund Tilney. Revisions co-ordinated by Hand C. Revised by Henry Chettle, Thomas Dekker, Thomas Heywood and William Shakespeare." The MS is a foul paper in the handwriting of Anthony Munday. Censorship notes are included throughout by Edmund Tilney, Master of the Revels. Revisions are by Chettle (Hand A), Dekker (Hand E), Heywood (Hand B) and, probably, Shakespeare (Hand D).[234] Hand C is an unknown professional theatrical scribe who made several annotations on top of the alterations.[235] Shakespeare is thought to have worked on Scene 6, based upon handwriting and stylistic analysis. He may also have worked on Scene 8, although this is based purely on stylistic analysis, as Scene 8 exists only in a transcribed version by Hand C.[234] Shakespeare's name was first linked to the play by Richard Simpson in 1871. One year later, James Spedding elaborated upon and rejected some of Simpson's claims, but ultimately concurred that Hand D was Shakespeare's.[236] In 1923, Shakespeare's Hand in the Play of Sir Thomas More saw a quintet of major scholars (Alfred W. Pollard, W.W. Greg, E. Maunde Thompson, J. Dover Wilson and R.W. Chambers) support the Shakespearean attribution. What is known for certain is that Hand D does bear a striking resemblance to the extant examples of Shakespeare's handwriting, and if it is not his handwriting, it is not the handwriting of any contemporary playwright whose handwriting has survived. Thus, the vast majority of contemporary paleographers believe that Hand D is that of William Shakespeare.[237]
First recorded performance: it is unknown if the play was ever performed during Shakespeare's day, although due to its censorship problems, it is highly unlikely. The earliest recorded performance occurred at Birkbeck, University of London in December 1922, where it was performed by the students and produced by members of the English department.[238]
Evidence: the original play is traditionally believed to have been written sometime between 1592 and 1595 by Munday and Chettle. The early scenes of the play depict "Evil May Day", the name given to an anti-alien riot in London in May 1517. Anti-alien riots also occurred in 1593 and 1595, followed by the execution of the ringleaders. In the play, Henry VIII is depicted as being relatively merciful to the instigators of the riots, whereas in 1595, Queen Elizabeth showed no such leniency. The theory is that no playwright would have written a play which knowingly portrayed the current monarch in such a negative light when compared to a previous monarch, and as Munday was an occasional government spy, he would be even less likely to do so. This places the date of initial composition as prior to the 1595 executions but probably after the initial re-emergence of xenophobia in the autumn of 1592.[239] Tilney's specific objections to the depiction of the riots and their aftermath suggest that he received the play when these issues were still considered sensitive.[240][241] Due to these censorship issues, the play was probably laid aside until after the death of Queen Elizabeth in 1603, when Tilney's objections would have carried less weight. The revisions were made at this point, although without the participation of Munday.[242][243] Several aspects of the revision work support a date of 1603–1604. For example, the additions contain twenty-seven profanities forbidden by the Act to Restrain Abuses of Players (1606), making it highly unlikely they were added after this date. There are also three references in Chettle's revision work to the court (Sc.13.64[244]), the King (Sc.13.78-80) and "Lord Spend-All's Stuart's" (Sc.13.110) which are probably references to James I, who came to power in 1603. There are also several parallels with Chettle's The Tragedy of Hoffman (written between 1602 and 1604).[245] Stylistic analysis of Scene 6 also supports this date. MacDonald P. Jackson's examination of vocabulary and pauses-in-verse place the material between Twelfth Night and Macbeth.[246] A colloquialism-in-verse test places it after Twelfth Night and Troilus and Cressida.[247]

A transcript of Charlton Ogburn's 1984 TV debate with the occasionally outraged and indignant Maurice Charney, then Professor of English at Rutgers University. "Mr. Ogburn [and other Oxfordians]... don't really like the author… go to article

You are looking at Hand D, right here. There really is no doubt about Hand D. And there really was none created in the MOOC. This section (and its discussion forum) made smoke, weaved and bobbed, ducked and dived but could make no… go to article

We have taken the liberty of reproducing large chunks of Diana Price's article rebutting the content of our Hand D pages (which she does without referring to them or linking to them). You can download the whole article here.… go to article

The play's the thing Think when we talk of horses, that you see them Printing their proud hoofs i' the receiving earth; For 'tis your thoughts that now must deck our kings, Carry them here and there; jumping o'er times, Turning the… go to article

Ian McKellen does a bit. The last actor to create a Shakespearean role.Can you doubt it? Someone should give this speech at Tory Party Conferences and Republican Caucuses.Not just Will Shakespeare but Will at or near his best.. Yet note… go to article

The debate on authenticity is over Hand D belongs to one of six different individuals, five authors and one scribe, who contributed to the manuscript of Sir Thomas More, now in the British Library. Today, aside from anti-Stratfordians,… go to article