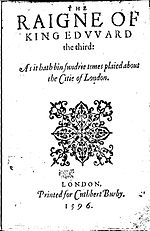 First official record: entered into the Stationers' Register by Cuthbert Burby on 1 December 1595 as "a booke intituled Edward the Third and the blacke prince their warres wth kinge Iohn of Fraunce."
First published: published in quarto in 1596 as The Raigne Of King Edvvard the third (printed anonymously for Burby). This text was republished in 1599 (printed by Simon Stafford for Burby).
First recorded performance: although it is known from the 1596 quarto title page that the play had been performed in London during the 1590s, the earliest recorded performance was not until 6 March 1911 at the Little Theatre, directed by Gertrude Kingston and William Poel. However, this production presented only the first half of the play (dealing with the Edward's infatuation with the Countess of Salisbury). Performed under the title, The King and the Countess, it was presented in a single matinée performance with the anonymous sixteenth century liturgical drama, Jacob and Esau.[87] The first known performance of the complete text took place in June 1986 at the Globe Playhouse in Los Angeles, directed by Dick Dotterer, as part of the Shakespeare Society of America's presentation of the entire 'canon' of Shakespeare Apocrypha.[88] The first known production of the play in the United Kingdom was in July 1987, at the Theatr Clwyd, directed by Toby Robertson.[88]
Additional information (attribution): first attributed to Shakespeare by the booksellers Richard Rogers and William Ley in 1656, Shakespeare's possible authorship of the play was first investigated by Edward Capell in 1760. Although the question of authorship remains unresolved, many scholars do now agree that Shakespeare was involved in some way with writing the play, and that it deserves a place in the Shakespearean canon. Specifically, the argument has been made that if 1 Henry VI can be attributed to Shakespeare so too can Edward III, as some scholars argue that Shakespeare only wrote about 20% of 1 Henry VI,[60] whereas estimates for Edward III tend to range from 40%[89] to all of it.[90] The play was included in the 2nd edition of the Riverside Shakespeare in 1996. In 1998, Giorgio Melchiori edited the first stand-alone scholarly edition of the play, for the New Cambridge Shakespeare. The play was also included in the 2nd edition of The Oxford Shakespeare: The Complete Works in 2005, edited by William Montgomery, and in the 2nd edition of the Norton Shakespeare in 2008. The Arden Shakespeare published an edition of the play in 2017, edited by Richard Proudfoot and Nicola Bennett.
Evidence: Edward III has been assigned many different possible dates of composition by a number of scholars. For example, Karl P. Wentersdorf favours a date of 1589–1590.[91] MacDonald P. Jackson argues for 1590–1591.[92] Roger Prior argues for a date of 1594.[93][94] Obviously, the play was written by December 1595. A terminus post quem of 1590 can be fixed by Shakespeare's use of several post-1590 accounts of the defeat of the Spanish Armada in 1588.[95] According to the title page of the 1596 quarto, the play had been performed recently in London, but no company information is provided. However, both MacDonald P. Jackson and Richard Proudfoot have argued that Edward III must have been part of the repertory of Pembroke's Men.[96] This would explain the absence of an acting company on the title page; the company that performed the play had disbanded during the closure of the theatres from June 1592 to March 1594 (Pembroke's Men disbanded in September 1593). Giorgio Melchiori believes the connection to Pembroke's Men can help date the play. All of the Shakespearean plays performed by Pembroke's Men are pre-plague; Taming of the Shrew, The Contention, True Tragedy, Titus and Richard III. These plays all feature relatively large casts, with an emphasis on platforms, at least two doors and an upper stage. Edward III, however, needs only ten adult actors and one boy (the most cast intensive scene is 5.1). Battle scenes are also muted, especially when compared to True Tragedy or Richard III, and the siege scene (4.2) requires no doors or upper stage. The conclusion reached by Melchiori regarding this evidence is that the writer(s) of the play were unsure where it was going to be staged, and therefore wrote it in such a way that it could be adequately staged by a small company performing on a basic stage. This would suggest it was written during the closure of the theatres, which places the date of composition sometime between mid-1592 and late 1593.[97][98]