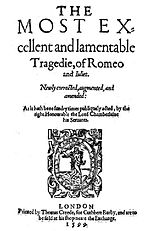 1599 second quarto of Romeo and Juliet

First official record: version of the play published in quarto in 1597. The play was not entered into the Stationers' Register at the time, not appearing until 22 July 1607.[122]
First published: version of the play published in quarto in 1597 as An excellent conceited tragedie of Romeo and Iuliet (printed by John Danter for Cuthbert Burby). A revised version, "newly corrected, augmented and amended," was published in 1599 as The Most Excellent and Lamentable Tragedie of Romeo and Iuliet (printed by Thomas Creede for Burby). This text was republished in 1609 (by John Windet for John Smethwick) and 1622 (by William Stansby for Smethwick). The Folio text appears under the title The Tragedie of Romeo and Juliet.
Additional information (publication): the 1597 quarto text has traditionally been considered a bad quarto,[123] and was one of the original texts in relation to which Alfred W. Pollard coined the term.[75] However, in his 2007 edition of the quarto text for the New Cambridge Shakespeare: The Early Quartos series, Lukas Erne argues that although the text does exhibit many signs of memorial reconstruction, there is also evidence of authorial revision, and he believes the Q1 text is a closer representation of the play as it would have been performed at the time than either the longer Q2 or the 1623 Folio text (which was set from Q2).[124]
First recorded performance: 1 March 1662 at Lincoln's Inn Fields, performed by the Duke's Company. Samuel Pepys wrote of the production (the first since the reopening of the theatres), "it is the play of itself the worst that ever I heard in my life, and the worst acted that ever I saw these people do."[1]
Evidence: as there is virtually no external evidence (other than the quarto text which establishes 1597 as a terminus ante quem) with which to date the play, most arguments tend to centre on references within the play to topical events, publication dates of Shakespeare's influences, and stylistic evidence. A much discussed possible topical allusion is the Nurse's reference to an earthquake which took place eleven years previously (1.3.24-36). The specificity of this reference has led many scholars to argue that Shakespeare must have been referring to a real earthquake. Originally, Thomas Tyrwhitt suggested the 1580 Dover Straits earthquake, which would place the composition of the play in 1591.[125] Sidney Thomas, on the other hand, argues it may refer to a quake on 1 March 1584, mentioned in William Covell's Polimanteia, which was published in 1595 and with which Shakespeare was apparently familiar. This would suggest a date of composition of 1595.[126] Influences on the play include Samuel Daniel's Complaint of Rosamund (1592) and John Eliot's Ortho-epia Gallica (1593), suggesting the play could not have been composed earlier than 1593.[127] A colloquialism-in-verse test places it closest to Richard II, Ants Oras' pause test places it immediately after Love's Labour's Lost and immediately prior to A Midsummer Night's Dream, and a rare word test links it most closely to Love's Labour's Lost.[127] Stylistically, the play is also firmly situated within the 'lyrical plays', which are all dated 1594–1595.[113] This would correspond to the 1584 earthquake (assuming Shakespeare had in mind a particular quake at all), and suggest a main composition date of 1595. However, in her 2000 edition of the play for the Oxford Shakespeare, Jill L. Levenson argues that the play was most likely composed over several years, possibly covering a span as wide as 1593–1599.[128]