A little touch of Henry in the Night

It's hard to understand why Oxfordians try to tie the plays to familiar biographical landmarks when the most astonishing characteristic that they all share is their inventive originality. Looking for an authorship candidate who calls himself 'The Italian Earl' makes no sense when dealing with a man who contributed so much innovation and defined what it means to be English.

In a unique act of egalitarianism, for which there is no source, Henry puts on a cloak the night before Agincourt and wanders through the camp, talking to the rank and file.  Instead of patronising the troops with heroic encouragement (that can wait till morning), Henry sits with them, debating the justice of the cause and the King's responsibility for the lives of his soldiers and their imminent perdition.

Like all soldier's quarrels, it ends in a challenge but not before Bates, one of the soldiers, terminates discussion of the metaphysics of blame with the line 'I do not desire he should answer for me, and yet I determine to fight lustily for him.' This is all the modern monarch can ask of a subject. Not unquestioning loyalty but a reasoned sacrifice, making the best of a bad situation, realistic about the depressing prospects but loyal and determined to do his best.

Pull the other one

Once again, it is impossible to hear the voice of a beleaguered Earl who does not understand loyalty or sacrifice and has no time for plebs or menials. This is not the work of a man who justified wrecking his inheritance, selling asset after asset rather than trim his astronomical budget for perfumed gloves, hose and frippery. Oxford would be utterly incapable of grasping the lowly footsoldier's point of view, rendering it logically, with compassion and understanding and creating the prototype sane, level-headed Englishman from the strugglers amongst society's lowest rank.

The man who wrote, in response to his mentor's begging him to regularise his situation, 'and mine is made to serve me, and myself not mine.' did not create Bates. The man whose poetry obssesses over the wrongs done to him could never have written Henry's soliloquy after his night's walkabout.

No, thou proud dream,

That play'st so subtly with a king's repose.

I am a king that find thee; and I know

'Tis not the balm, the sceptre, and the ball,

The sword, the mace, the crown imperial,

The intertissued robe of gold and pearl,

The throne he sits on, nor the tide of pomp

That beats upon the high shore of this world-

No, not all these, thrice gorgeous ceremony,

Not all these, laid in bed majestical,

Can sleep so soundly as the wretched slave

Who, with a body fill'd and vacant mind,

Gets him to rest,

Oxford's self-pity has no external dimensions. There's no self-doubt, no questioning, no perplexity, no wrestling with fate, no responsibility for his own sorrows, no complications at all. Here, in his most elegant six lines, it's still just him. Having another moan.

And since my mind, my wit, my head, my voice and tongue are weak,
To utter, move, devise, conceive, sound forth, declare and speak,
Such piercing plaints as answer might, or would my woeful case,
Help crave I must, and crave I will, with tears upon my face,
Of all that may in heaven or hell, in earth or air be found,
To wail with me this loss of mine, as of these griefs the ground. 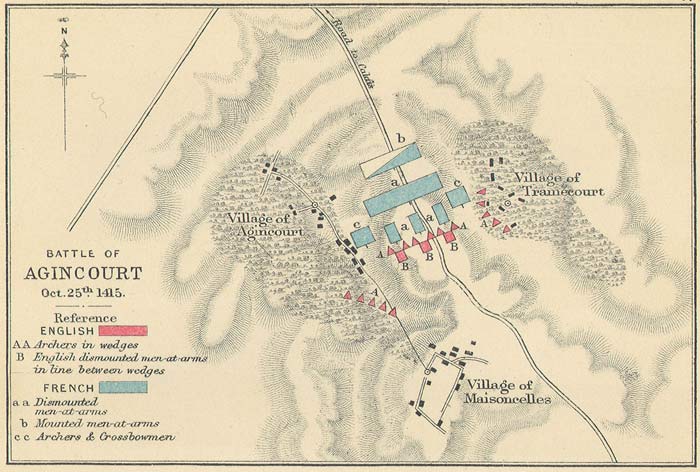 Living close to the coast, I travel quite a lot in Northern France and have some acquaintance in the modern
village of Maisoncelles. The anniversary of Agincourt has become a bit of a nightmare.
If you go, repect the battlefield, its neighbours and try to remember how stupid any impromptu recreations
are going to look to the locals. There's a BIG anniversary in 2015. Save it for that.