Play the dating game yourself.

Elliott and Valenza's data isn't the only game in town but their work is the most extensive and those who have followed their lead have come to identical conclusions. The Shakespeare Clinic they operated through the late 1980's and 1990's departed on an Oxfordian trajectory and the early results did lean towards plausible cases for the three front runners, Marlowe, Bacon and de Vere. They were joyously embraced by the alternative cadre. Horribile dictu; pencils got sharper, computers got faster, the battery of tests extended, differentiation improved, sophistication and accuracy went up through the roof, and disaster struck.  They went from hero to zero with Oxfordians almost overnight.

Their tests, they concluded, 'eliminated The Earl' as a candidate. Eliminated. They eliminated another 56 candidates too, including all the favourites.

Which was a bit rough and turned out to be a bit hard to take. Unsophisticated rebuttals and even more unsophisticated abuse of their data abounds but it's too late. The genie has left the bottle. The toothpaste will not now go back into the tube. The paper they published in The Oxfordian (Vol III, 2000) called Can the Oxford Candidacy be Saved? has received no substantial rebuttal.

The more they refine their data, the more errors they remove from the process, the tighter the plays are tied to Shakespeare.

In the UK, there has been a steady erosion of the cut-glass, upper crust, posh BBC RP accent since the 1950s. Feminine endings in blank verse are a similar litmus test. A line of iambic pentameter has a feminine ending when there are one or more unaccented syllables after the fifth stress. The verse sounds different. More natural, perhaps. More versatile, certainly. This chart tracks the increase in the % of feminine endings in both Will's work and theatre generally while Will was working. 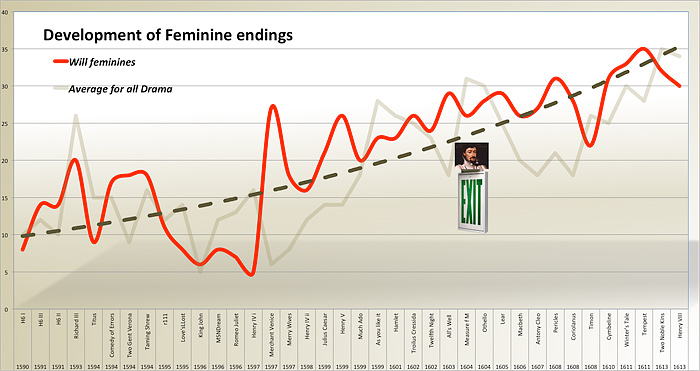 If you arrange the plays in the order of their feminine endings, they line up pretty well with conventional dating. There is a big inconsistency with The Merry Wives of Windsor (the 1597 spike on the graph) but absolutely no danger of Shakespeareans chasing the statisticians down the street with an axe. The chart shows the American Riverside dating of the plays, plotted against the number of feminine endings for Will's plays and an average for the work of his contemporaries. Like every other metric, it shows a smooth upward trend, in all drama, which continues in both sets long after Oxford has left the scene. Which is one of the reasons why they eliminated him.

And if they can, we can.

Here are two more charts measuring different metrics and a third chart based on the Oxfordian dating scheme proposed by Clark. Will's stylistic progression is pretty consistent whichever metric you choose, when mapped against the Riverside dating scheme (or any orthodox dating scheme).

The Clark dating scheme, however, pictorially represents the absolute nonsense on which the scheme is based.

The analysis used, which takes no account of the content of the plays and is therefore totally unrelated to matters of developing style, produces a meaningless hotchpotch, exactly reflecting the meaningless construction her arguments have produced.

The analysis shows that there is internal consistency but that Clark is completely unaware of it or has ignored it.

Putting the plays in alphabetical order makes more sense stylistically than following Clark. In fact once you have them in a spreadsheet, most random orders make at least as much sense as Clark. 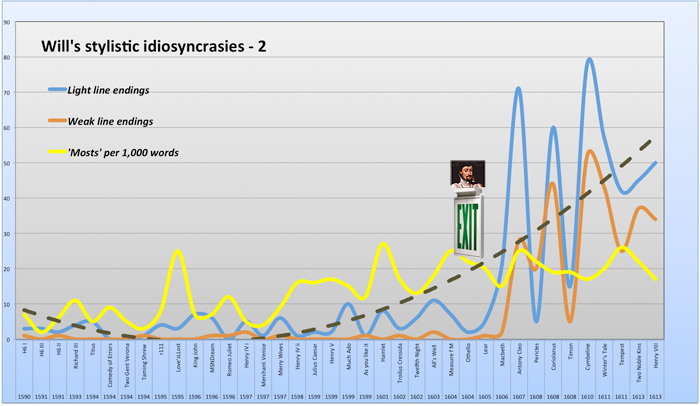 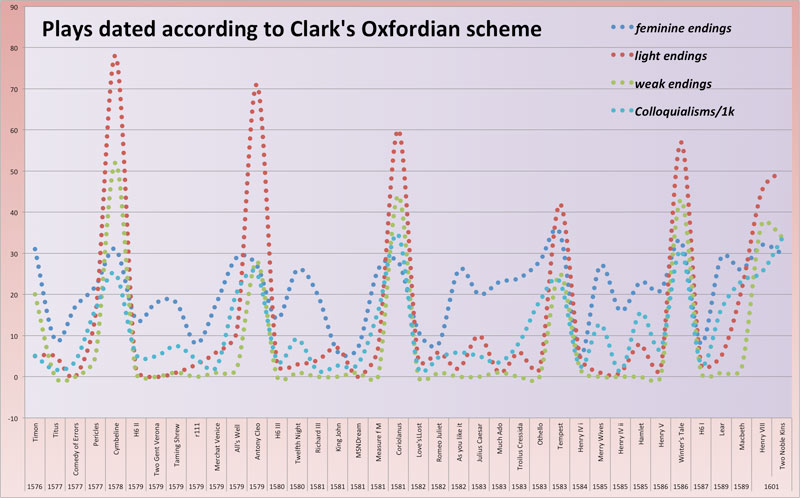 Like Baldric, an Oxfordian called Ron Hess came up with a cunning plan and decided to play along with what looked like pretty conclusive data. Instead of randomly reassigning the dates of plays, he simply moved everything back 12 years. This brings the authorship of the last plays into the  lifetime of De Vere but while it now makes sense of Will's progression, it causes absolute stylometric catastrophe when the early plays are compared to those of Will's peers and the theatre of what would, in Hess's claim, now be that of the late 1570's and early 1580's.

Nor can Hess advance any sensible reasons for the backdating of half the plays. The Clark and Hess alternative dating schemes are included in the table below.

Until Oxfordians can come up with a sensible scheme that allows The Earl to have written the work while he was alive, there really is no alternative authorship case for De Vere. At the moment, the SAQ awaits a new publication from Stritmatter and Kositsky which will 'revolutionise Tempest Studies'. Unless they are referring to climate change, this will have no impact at all on 'Authorship Studies' since tinkering with the date of one play is not enough. A coherent whole must be produced for all 37 plays in the canon. (38 counting TNK)

And current Oxfordian thought (with humble apologies to the peerless statistical work of Messrs E&V) is at least million miles from coherence. 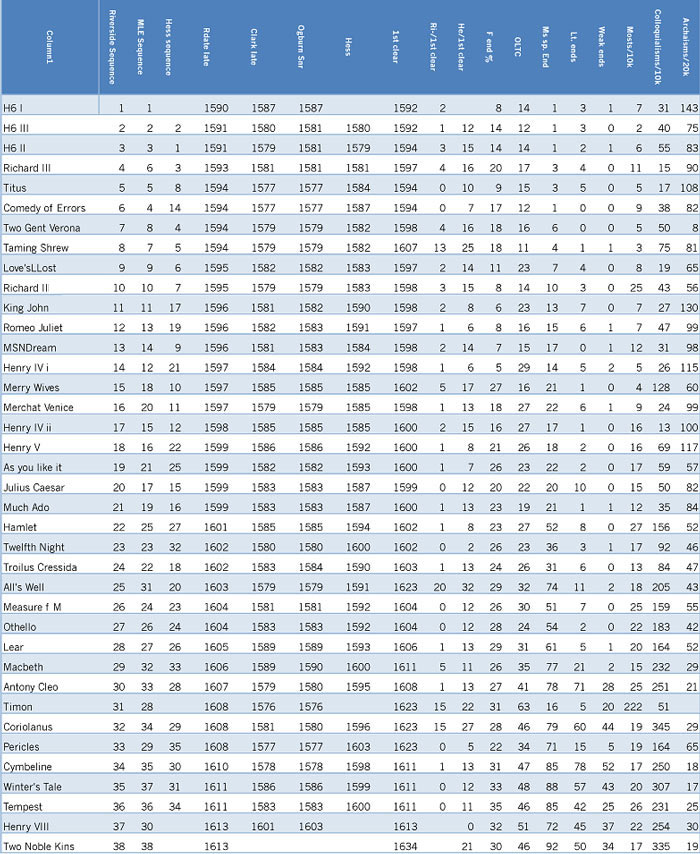