One of the worst features of Barber's case, the weakest of her insinuations and one of the most depressing features of the invented profile for her non-existent second Shakespeare, is the opprobrium heaped on Susanna Hall, her father and her grandfather in the hope of casting doubt on the literacy of the Shakespeare family as a whole. Barber and her fellow anti-Shakespeareans want Shakespeare's daughters to be illiterate. They want his father to be illiterate. Many of them want the whole town of Stratford-upon-Avon to be illiterate. Shakespeare's father John, a man who applied to the College of Heralds for a coat of arms (remember that woeful argument?) once served as Mayor. If a man in the town's highest office couldn't read, why should anyone else? No one bothers to explain how a Town Council could work with illiterate councillors. Mere detail.

Sounds like nonsense? It is. Susanna Hall 's signature is illustrated above.

“Witty above her sex, but that’s not all,
Wise to salvation was good Mistris Hall,

Nat Whilk presents an enlightening parallel case but is there really any more to do than glance at the even width and pressure in the downstrokes of her signature or the elegant tapering italic at the tops of the double 'l'? Is any more proof of literacy necessary? Before you answer, find yourself a Rotring calligraphic pen with a broad italic nib and see how much practice it takes to produce anything like the elegance of Susanna's hand. There's a larger image behind if you click on the one above. You can see how rough the paper was. Yet despite the nonsense of her illiteracy being clear form just this image, Barber clings to it and repeats it unchanged. Without comment.

Scholars have long assumed that Barbara Gamage Sidney, Countess of Leicester— whose sister-in-law, brother-in-law, husband, and daughter were all poets—was illiterate, based on her awkward, “drawn” signatures, and the absence of letters in her hand.

Some key points: “She did not think of herself as a writer, to our knowledge, and her side of her extensive correspondence with her husband Robert Sidney, first Earl of Leicester, has been lost—while she saved at least 332 letters that he wrote to her. We know that she wrote approximately as often as he did, since he so frequently refers to her letters.” “So how did her letters disappear?

The most frequent explanations for the missing letters have been either that Barbara was illiterate and did not write on her own behalf, or that she was nearly illiterate, and therefore her husband was too ashamed of her letters to keep them. However, he (or later generations) also lost or discarded letters from other women in the family, including his learned and eloquent sister the Countess of Pembroke.”

Preservation issues, check. The writings of women, like the writings of commoners, were undervalued: too often “lost or discarded.” “Barbara was apparently bilingual in Welsh and English, and she may well have been fully literate in both languages, although we now suspect that she read English well but did not write it easily, like many Welsh (and English) gentlewomen of her generation.

She obviously read letters herself, since Robert sent her an open letter to deliver after she had read it. (Letter 82), and, like Barbara’s father, he wrote to his wife about matters that he asked her not to share with anyone (167).” Close reading is the enemy of confirmation bias. Going to Hannay’s edition of Robert Sidney’s letters, I find this line in 82: “I send it open unto you, because you may see it: when you have read it seal it and send it unto him.” In 167, Robert is deeply in debt, and anxious lest anyone, above all his daughter’s prospective husband, should find out: “If my ill-willers should know in what state I were, it were subject enough for them to laugh at me forever. ... You see how I acquaint you with the depth of all and do desire your advice.”

So Barbara could read. Could she write? Madeleine Gray in the ODNB: “It is even possible that she was unable to write and dictated her letters to an amanuensis, though the personal tone of Robert's letters to her suggests they were written for her own eyes. Margaret Hannay: “Barbara’s ability to read her husband’s letters would not necessarily imply the ability to respond without the aid of a secretary, because reading was usually taught separately from writing.”

Reading first; then writing afterward. Many many people, especially women and common folk, could read far better than they could write. Women were taught to write italic hand, if they were taught at all: it was considered far easier than the “masculine” secretary hand, for people who wrote for a living. Barbara “must have had an acceptable hand, however, for Robert told her to write to her cousin the Lord Admiral and promised to ‘set down what you shall say to him’. That is, in this sensitive political matter, he would compose her letter, but she should send it in her own hand.”

Critical thinking, check. “Assumptions that she was nearly illiterate are based primarily on four pieces of evidence. First there are her awkward signatures, even more awkward after her husband was made Viscount L’Isle and she wrote “B. LiSle” instead of her earlier signature “Bar: Sydney”; her later signature uses the capital “S” in the middle and is printed in a large, scrawling italic hand that does indeed look more drawn than written, as Peter Croft observes.” Peter Croft being the discoverer and first editor of Robert Sidney’s autograph poetry, who writes of his lady with withering condescension: “a reluctance to expose Barbara's illiteracy may have been what persuaded her husband not to allow her letters to survive. ... We can discern his anxiety lest his growing family should suffer as a result of their beloved mother's lack of education.” “Not to allow”?

Remember: his letters were sent to her at Penshurst; hers were sent to him on his travels, very often abroad. The second piece of alleged evidence is that “no literary works by her are extant or referred to by her contemporaries”; the third, that Mary’s Urania “includes her in none of the literary exchanges that constitute so much of that work.” Excuse me, but it is quite possible to be literate and not a poet, even in the Sidney family. The fourth is that the “Mr. Bird, the children’s tutor, retorted to her attempts to control him by blaming her ‘want of education.’”

This was in the context of a Penshurst power struggle. Bird “was attempting to establish that he was more educated than she—and therefore she had no right to challenge him. The difficult Mr. Bird, who was constantly angling to gain control over the household, later so enraged his pupil William Sidney that Will stabbed him with his penknife in August 1605.” Ah, Penshurst! Whose children (as Ben Jonson wrote) “have been taught religion; thence / Their gentler spirits have sucked innocence.” So: Barbara was not a poet and not Latin-learned.

That does not equal illiterate. Neither does bad handwriting: “Even if her hand was relatively unpracticed it is unlikely to have been more difficult to read than Robert’s notoriously bad hand, particularly in his later years. (His deteriorating handwriting could be partially attributed to the aging process, either failing eyesight or perhaps an arthritic hand.)” (Or in Shakespeare’s case, being propped up on a deathbed.)

That led me to this takedown of the Sidney brothers’ writing skills: “Some italic hands, such as Sir Philip Sidney's and his brother Robert Sidney's, were so bad that contemporaries found them troublesome to read. ... Despite having received formal instruction in writing ... Robert’s mature hand was extremely sloppy. ... Lord Burghley, upon receipt of a letter from Robert, “cast it oft from him” because “he could not read it.” (Steven W. May and Heather Wolfe, “Manuscripts in Tudor England” A Companion to Tudor Literature, ed. Kent Cartwright. Wiley-Blackwell, 2010, 137)

So awkward signatures do not mean that the writer was illiterate. They do not mean that s/he was unaristocratic. And here we see a parallel with Shakespeare’s “illiterate daughter.” Robert Sidney writes of Mr. Bird “My lady complaines that she hath suffred at his hands more contempt then was fitt for hym to vse, in laying before her the want of educacion in her self, and therfore cold not iudge of yt in others.” Mr. Cooke: “I being acquainted with Mr. Hall's hand, told her that one or two of them were her Husbands, and shewed them her; she denyed, I affirmed, till I perceived she begun to be offended.”

Men expecting women not to understand—now where have we seen that?

So, was Susanna 'functionally illiterate' - someone who could sign her name, but not really read or write?

The answer to this, like the answer to all of Barber's insinuating, semi-rhetorical questions—"Does this suggest something detrimental to Shakespeare?"—is an emphatic "No!" And the answer to "Does this have any weight in the authorship issues (as I'm trying to imply)?" is an even more emphatic "Hell no." Barber is just wasting everyone's time.

This is what the signature of an illiterate person (Sojourner Truth) looks like. Notice the difference? Of course you do. More hidden argument, more deception. 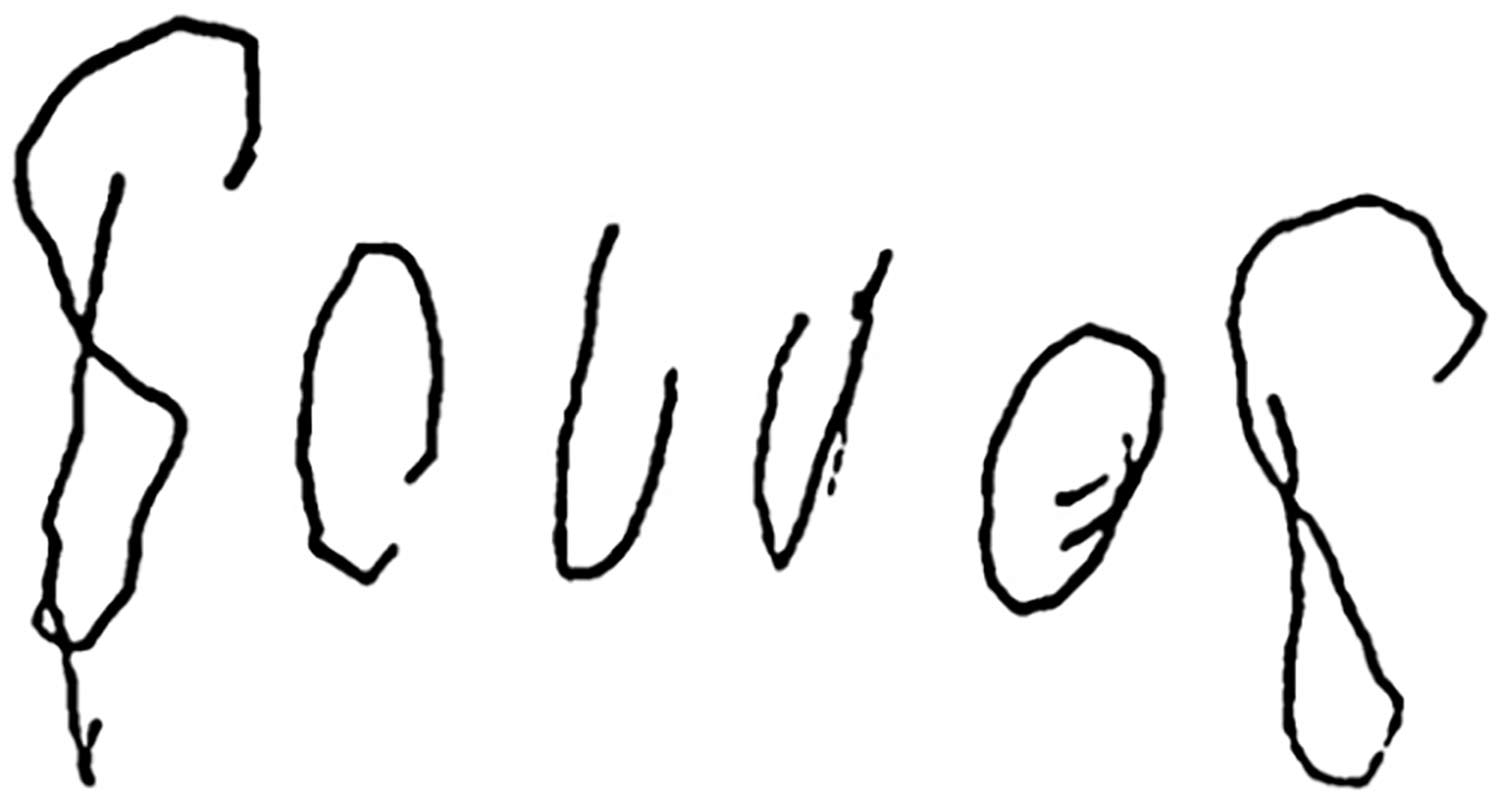 Peter, for me the converse is true. I would say that 'until such evidence is found, scholars should not assume that Shakespeare's daughters were illiterate'. Innocent until proved guilty! There is no sound evidence that they were illiterate but it is a convenient supposition for some people to use in argument.

Kids are taught their ABCs, then how to read, and THEN how to write (as in, writing words). How would anyone know how/what to write if they couldn't read? Learning one's ABCs certainly involves tracing out the individual letters but that does not constitute writing.

We're here discussing her illiteracy on a course module where the teachers are willing to advance it as an argument against Shakespeare's authorship. When the counter evidence is almost impossible to dismiss. It's an ad hominem argument (there's no ad rem content) and yet it always comes up.