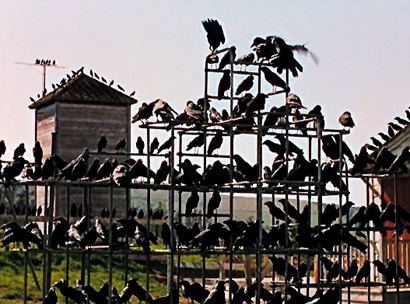 In honour of the forthcoming conference of Oxfordians in Toronto we have decided to run a competition for the best collective noun, describing either a group of Oxfordians or, at a stretch, a group of Oxfordian arguments. Remember the climbing frame scene in The Birds? Imagine it without the sense of foreboding but with a lot more crowing and you'll be on the right lines.

As with the silliest Oxfordian argument, we will have two rounds. The first will allow voters to add their own suggestions for a collective noun and then the second, run-off round will eliminate the no-hopers and pick a winner. The difference this time is whoever suggested the most popular choice will win a prize.

Prizes will be from our new line of branded Oxfraudian accessories. You can choose between Tee and Sweat shirts or a coffee mug bearing one of our best-selling legends: "My other candidate is a playwright" or "I'm a Barbie Earl" or "Oxfordians ate my hamster" (not office-safe).