Can the plays be dated accurately? 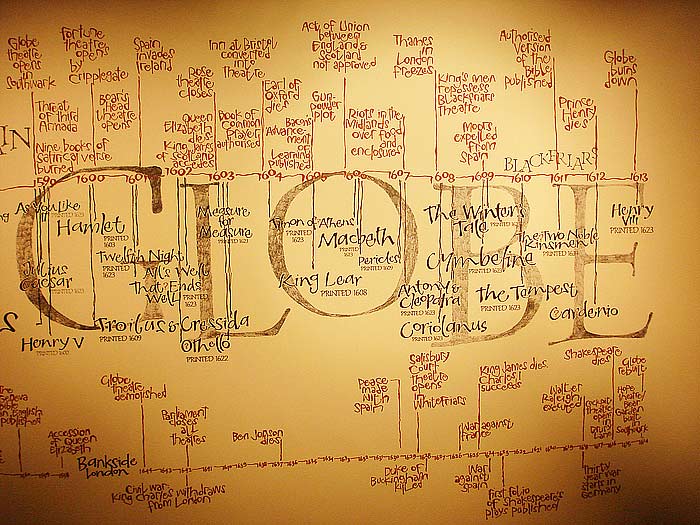 Shakespeare's Timeline at The Globe. Picture by Dysanovic

In fact, no one really argues with the basic consensus.

There have been graduate dissertations which have attempted the odd daring revision of the order of the early plays or have suggested hitherto undiscovered collaborations. There is some sputtering, unenthusiastic debate over small issues, such as whether Cymbeline or The Winter's Tale came first but on the whole, scholars have been reasonable happy with chronology for quite a long time. Recent contributions using computers to assist the art (or science) of stylometry have greatly improved the detailed support for the development of Shakespeare's art. However, the chronological order of the plays in the Edwardian Windsor Shakespeare, published in 1910 by Caxton, has them in much the same order as the latest edition of The Oxford Companion to Shakespeare.

Not a source of much controversy, then.

Alan Nelson and Steven May, the two leading Oxford documents scholars in the world, have shown that, although many documents connect William Shakspere of Stratford to Shakespeare’s poems and plays, no documents make a similar connection for Oxford. The documents, they say, support Shakespeare, not Oxford.

Our internal- evidence stylometric tests provide no support for Oxford. In terms of quantifiable stylistic attributes, Oxford’ s verse and Shakespeare’ s verse are light years apart. The odds that either could have written the other’ s work are much lower than the odds of getting hit by lightning. Several of Shakespeare’ s stylistic habits did change during his writing lifetime and continued to change years after Oxford’ s death. Oxfordian efforts to fix this problem by conjecturally re-dating the plays twelve years earlier have not helped his case. The re-datings are likewise ill- documented or undocumented, and even if they were substantiated, they would only make Oxford’ s stylistic mismatches with early Shakespeare more glaring. Some Oxfordians now concede that Oxford differs from Shakespeare but argue that the differences are developmental, like those between a caterpillar and a butterfly.

This argument is neither documented nor plausible. It asks us to believe, without supporting evidence, that at age forty-three, Oxford abruptly changed seven to nine of his previously constant writing habits to match those of Shakespeare and then froze all but four habits again into Shakespeare’ s likeness for the rest of his writing days. Making nine such single-bound leaps from a distant, stylistically frozen galaxy right into Shakespeare’s ballpark seems farfetched compared to the conjectural leaps required to take the Stratford case seriously. Note, for example, the supposition that the young Shakespeare, who was entitled to do so, might actually have attended the Stratford grammar school. It is hard to imagine any jury buying the Oxfordians’ colossal mid-life crisis .

All of the heat in the issue comes from Oxfordians who, reasoning backwards again, are forced into a dating argument by De Vere's death in June 1604. No one can say whether the number of unwritten plays was 10 or 11 when The Earl was buried in Hackney, as the parish registers confirm, on 6th July 1604. As there is some flexibility, scholars aren't too dogmatic about moving a single play a year or two, here or there. It might be 10 or it might be 11. However, it flies in the face of hundreds of years of common sense, history and scholarship to claim, as Oxfordians do, that none at all were written after De Vere's death.

The dating part of the Oxfordian argument closely resembles the weakest argument in offered by creationists who claim that 'scientists disagree over the Theory of Evolution and so do we' as if the creationists and scientists were saying almost the same things instead of the polar opposites. Oxfordians do the same thing.

In fact, there is resounding, 100% agreement amongst academics (and logicians) that both of these statements are absolute nonsense.

It must be accepted that plays cannot be performed before they are written. Likewise, they must be written after any historical events to which they refer. That's a dating yardstick. The Elizabethan theatre kept reasonably good records of performances, even if the playwrights themselves did not.

Secondly, you cannot argue that early work was written after later work when there is a clear development in style over a writing career spanning more than 20 years. That's another yardstick. If you look at the work of the Beatles or Beethoven, it illustrates this point perfectly. Early work can be distinguished from late work without the aid of a calendar or a commissioner for oaths, without even the need of much expertise.

Thirdly, the theatre itself underwent a revolution during the 20-year timeline of the plays' performance. Changes in taste, genre, format, the move to indoor theatre can all be accurately chronicled. Plays written in 1610 look and sound different to plays written in 1590. That's another yardstick.

Ultimately, this argument is too grossly at odds with the available documentary record and stylometric numbers for Oxford to be a plausible claimant.

Fourthly, the English language underwent its greatest transformation in the 20 years Shakespeare was active. This is also reflected in the timeline of the plays. That's a fourth yardstick.

Study and scholarship have used these four yardsticks (and lots more) to achieve a consensus on the dating of the plays which cannot be dislodged.

Not by Oxfordians. Eva Turner Clark produced an Oxfordian Dating scheme which fitted the Oxfordian facts as she saw them. Oxfordians seeking to defend the Earl from the onslaught of stylometry in the 1990's dropped it like a hot brazier as it made no sense whatsoever. So far, since Clark's ideas were torn to tatters, no new comprehensive chronology has emerged. A sound chronology requires the forging of solid links. Oxfordians now concentrate on picking small holes here and there, preferring to tackle one existing anomaly at a time rather than risk creating new ones by trying to produce a consistent alternative theory. Why risk being torn to shreds by anyone with access to a calendar and Google? Again.

There is no doubt that Shakespeare's career as a writer extends at least 8 years beyond Oxford's death.