To be or not to be Hamlet

To be or not to be Hamlet 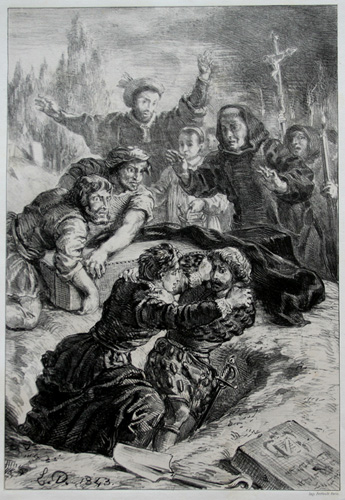 At her funeral, Hamlet leaps into Ophelia’s grave to outdo the grief of her brother with his own: “I lou'd Ophelia; fortie thousand Brothers Could not (with all there quantitie of Loue) Make vp my summe.” The anger of the brother and the grief of the suitor square up to each other as the famous scene progresses, setting up the play’s climax perfectly, triggering a new decisiveness in Hamlet which is soon mirrored by Laertes' commitment to revenge his sister, leading to a duel in which they both die.

Oxford did not bother to show up for his own wife’s funeral.

And whilst, in very suspicious circumstances, he killed an unarmed servant by stabbing him in the leg with his sword, then contrived, with his guardian to have the jury at an inquest find that the servant ran on to his blade, his only duel was fought against an older man, the uncle (not the brother) of Ann Vavasour his mistress, not his intended.

Yet Oxfordians argue that Hamlet is effectively De Vere’s autobiography.

Matters of detail have become trickier and trickier for Oxfordians over the last two years. In almost 100 years they have not been able to link Oxford to the work with any piece of tangible evidence. Most of the recent 'evidence' they put forward is based on biographical similarity and the favourite claim of the moment is that Hamlet can be seen to be autobiographical if people are willing to look at the wider picture.

Since Hamlet follows sources dating back to before Oxford was born, the claim is absurd in itself. No salient detail taken from the source can be said to be a link to De Vere’s life. Even if this impossibility did not exist, the claimed resemblances are feeble enough to demolish any similarity between one life and the other.

Although Shakespeare, as Professor Will Sanders, head of the English Faculty at Cambridge said, 'cannot see a genre without subverting it', Hamlet is a revenge tragedy.

The time is out of joint, O cursed spite,
that ever I was born to set it right.

Hamlet's father has been murdered, a ghost has assigned him the task of revenging the offence and his mother has married his father's murderer, thwarting Prince Hamlet's right to replace his father as King of Denmark. Hamlet is the acme of the Renaissance scholar and has studied at Europe's most famous school of science, is a philosopher and liberal observer and court commentator. Hamlet may well be in love with Ophelia but the relationship isn't consummated and she commits suicide after her father and the king force her to act in a plot against the Prince. Laertes will also want revenge for his sister’s death. At the end of the play, the dying Hamlet is still committed above all to sound government as he gives his dying voice to a strong and warlike administrator rather than his friend, fellow Dane and long-time colleague, Horatio.

There is absolutely no resemblance between the key features of Hamlet's life and Oxford's.

De Vere was not a prince, had no difficulty with his inheritance after his father died of natural causes, did not study at university and lost his entire fortune through mismanagement of his affairs rather than subterfuge. He was married to Burghley's daughter for five years, made her life hell, had children with her and she died of natural causes. Oxford was an incompetent, opportunist, underhand plotter against sound government, more like Casca than Hamlet. Not much resemblance to the Danish Prince at all.

The entire Oxfordian case is based on some plausible but many more imaginary resemblances between one of the minor characters, the King's adviser Polonius and De Vere's guardian. Lord Burghley. Yet even here, the claimed resemblances are unconvincing. Burghley was one of the greatest statesmen of the 16C. His partnership with his monarch was unique. Polonius is sometimes played as bumbling and competent, almost Burghley's opposite. Yet Shakespeare still portrays him as a top statesman with a long career behind him—not nearly as green as he is cabbage-looking.

Oxfordians often cite Burghley's Precepts, a list of counsels to be given to young men about to leave home, in comparison with Polonius' famous speech to Laertes - 'neither a borrower nor a lender be'. Fathers have always given a version of this advice to sons about to depart for university. Burghley's Precepts ramble on over pages and pages.  Polonius covers all of the same ground in just 21 lines of unforgettable verse.

The lives of James I and the Earl of Essex are far more closely reflected in the plot of Hamlet than the life of De Vere, yet no one suggests them as the author of the play.

In fact, any sane reading of the facts cannot defend calling Hamlet an ‘autobiographical’ work if De Vere is intended to be the person depicted.