In one of his letters Henry James describes how ignobly fond he had become as he grew older of not travelling ; ‘to keep up not doing it’ he writes, ‘is in itself for me the most thrilling of adventures.’

So not to read Shakespeare, not to travel into his kingdom, but to sneak up at night towards the barriers that guard its frontier, and lurk there, terrified by the thought of the dangers I might encounter if I did really enter in, has become for me also a thrilling if not very noble adventure.

It may sound absurd to speak of danger in connection with a region which, in spite of a few geographical uncertainties, is so written up in handbooks, so betrod by tourists, so well provided with beaten roads and signposts and official guides. But it is a region, nevertheless, full of dark pitfalls for the mind ; tangled thickets there are of significant, as well as textual interpretation ; mazes of thought in which many wander and find no issue, and many paths whitened by the bleaching bones of critics. On one side of the beaten track, with its charabancs full of tourists, its files of boys and girls from the secondary schools, personally conducted by their teachers, lies the abyss I have mentioned of the great Dark Period ; on the other, the Serbonian sonnet-bog, in which armies whole have sunk ; while the attempt to reconcile the poetry which Shakespeare wrote with the prose of the extremely prosaic life he led is apt to addle the brains of those who undertake it. Shaken and appalled by the thought of this Apollo as an actor and jovial stage-manager in a little old London theatre—a mere bare room with a blanket for a curtain—this demi-god serenely running a popular show and raking in the pennies—this thought stupifies them, and they are seized with a kind of vertigo. Of the inhabitants of the insane asylums of Great Britain it has been calculated that, after the religious maniacs., the two next largest classes consist of those who rave about the Royal Family or those who, by thinking about Shakespeare, have unhinged their minds. 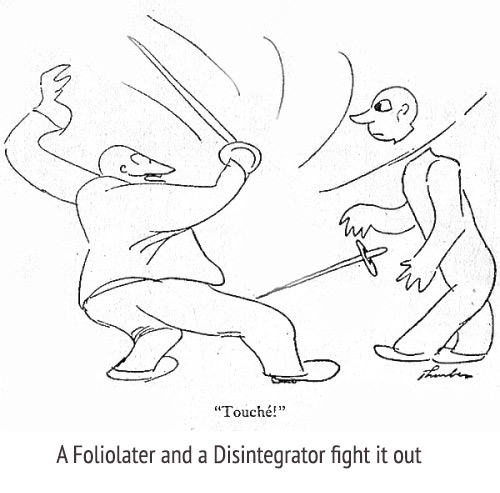 A great divine of the Elizabethan age describes in one of his sermons a region in the East, in Georgia, which was so immersed all day in gloom that no one could see his own hand within its borders ; those who dwelt upon its frontiers could hear, he said, the noise of cocks crowing, horses neighing, and the cries of human beings, but no one outside dared to venture in for fear of losing his way in that land of eternal darkness. Thus the cries of the distracted inhabitants sometimes reach us from the dark realm of Shakespeare interpretation. We hear the bleating of idiot adorers and the eternal swish of their whitewash brushes ; we hear the squeals of the idealists and blatherskites as Professor Stoll1 pigsticks them ; the war-cries of the Foliolaters and Disintegrators as they rush upon each other ; and even wilder battle-cries than these (for it is impossible to exaggerate their strangeness) will reach our ears. For listen ! the fanatic followers of no less than five ghostly, resurrected Elizabethan Earls are shouting at each other, the two bands of Pembrokians and Southamptonites, each vociferating that their Lord was the inspirer of the Sonnets, while three other bands proclaim the more glorious boast (at least more glorious to some thinkers) that Lord Derby, or Lord Rutland, or Lord Oxford, was the author of them, and of Shakespeare's plays as well. And then, faint and far, as the wind shifts, we hear the ululations of those vaster herds of Baconian believers, as they plunge squeaking down the Gadarene slope of their delusion.

Yes, on the whole I feel that I am against Shakespeare—the vast subject is too vexatious, too intricate and baffling. Though I may not join with Tolstoy and Bernard Shaw, and shout 'Down with Shakespeare !’ in the streets, I shall nevertheless keep well aloof from the grounds of that great lunatic asylum, that dark domain of ghosts and pedants, of blatherskites, monomaniacs, fanatics and fools.

Hardcover, 191 pages
Published June 1st 1933 by Scholarly Press
1. Professor Elmer Edgar Stoll: American critic who reacted against A. C. Bradley and insisted that study of Shakespeare's plays should be based on the dramatic conventions of the time at which they were written. His best-known book is Art and Artifice in Shakespeare (1933).
Disqus