Cry Murder! in a Small Voice 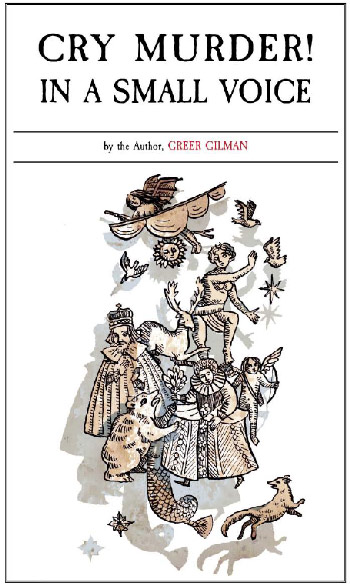 Some of us at Oxfraud are old hands at the Authorship Question, able to judge and anticipate the opposition's every move.

Others like myself, are relative newcomers, goaded into action by the nonsense surrounding the film, Anonymous, full of callow enthusiasms and insights that turn out to be commonplaces.

However, until comparatively recently, we were all agreed that, in its long, scratchy and wheedling existence, the debate has produced neither scholastic enlightenment nor literary addition. Ros Barber's The Marlowe Papers, now beribboned with awards (and reviewed separately), put an abrupt end to that idea. Now we have another work, perhaps less obviously a product of the authorship question but just as controversial in its treatment of one of the principles.

It too, is a delight. Greer Gilman's Cry Murder! in a Small Voice is a highly original, thought-provoking and beautifully polished tale; a short story written in a chewy, glistening Jacobethan prose which is entirely the author's invention.  Let's have some, straightaway. The opening sentence:

A coil of scarlet round the sweet boy’s neck: swan-white he lay, his whiter smock outspread as snow, his hand—O piteous!—imploring still. Venetia dead. Above her stood her lord and lover, still as if he held the loop of cord. A silence—

There's no authorship advocacy in Gilman's work. Thank God. An occasional thrust at a body lurking behind an arras, perhaps. A well-aimed stab here and there.

We mustn't give too much away. In the second paragraph we meet Ben Jonson. When the role of Jonson is being cast in the film version, the studio will want Harrison Ford, the producers will think about Liam Neeson but the director, who has read the book more carefully, will want Roger Allam before being forced to settle for Michael Fassbender. Want some more explicit hints?

Ben is a man with a few problems. That bloody Will Shakespeare and the fact that no one else can see his obvious shortcomings is one of them.

Enter the Lady. Will could fit a metamorphosiswithin a fool’s soliloquy, and to a line  And being Will, ’twould all be Mabwork. True, his ecstasies were brave in show—good silk expended on bad tawdry—but they wanted cutting. And his quibbles! Glovery, lithe words turned inside out

Well. Rivalry between playwrights was never pretty. But something worse, something real and something ugly has taken precedence over sniping at his rivals and Ben, like a character in one of Will's plays, has a choice. Ignore it as everyone else will, or take arms against a sea of troubles and do something about it.

The book is just 53 pages long, so you'll have to pay up to find out who is dead, who is guilty and where lie the connections to the Swan of Avon's laurels. However, whilst a knowledge of Ben and Will's work will enrich the experience of reading it, no knowledge of the authorship debate is required.Its mystery is an afternoon's diversion but its craft is there to be enjoyed with selective and repeated study.A restorative antidote to Anonymous and quite the perfect adjunct to The Marlowe Papers.

Please, sir! Can I have some more?Cry Murder! in a Small Voice