1. Shakespeare is not Oxford's pseudonym. There is no credible evidence that anyone from Shakespeare's time suggested that the canon was written by anyone other than William Shakespeare, nor did anyone express an opinion or even hint that the name 'Shakespeare' might be a pen name. Even if an aristocrat did not wish to put his name on plays for the professional theatre (though at least one Earl did publish a play under his own name), Oxford can have had no possible reason for withholding his name when publishing Venus and Adonis and The Rape of Lucrece, the first fruits of his invention. The success and quality of these poems could have secured the return to court and favour he was so earnestly (and unsuccessfully) seeking by other means.

2. Oxford was dead before a third of the work was written. Almost all other authorship groups have sensibly chosen candidates who were alive when the plays were written. Oxford was dead before a third of the work was complete. Oxford died in 1604. This was before Fletcher arrived on the scene, with whom Will collaborated on three plays, before the Gunpowder Plot which hangs like a miasma throughout Macbeth, before the food riots of 1607 which provide the entire political context of Coriolanus, before the move to the indoor theatre for which The Winter's Tale and Cymbeline were clearly written, before he could have seen a Masque at the court of King James or seen a play written for the new Romantic Genre or seen any of the 1610 source material for The Tempest. Oxfordians are entirely alone in attempting radical departure from the scholarly consensus on the dating of the plays, yet none of their attempts to establish an alternative chronology have been successful. No alternative chronology has acquired even the tiniest amount of support or respectability outside the small Oxfordian community. In addition to hundreds of topical references which post-date Oxford's death, the theatre, the language and blank verse continued to develop in the ten years Shakespeare was active after the Earl died. These changes can be seen as a progression in Will's work and are consistent with the same developments in the work of other contemporary dramatists. Given that removing this obvious disqualification is essential, the Oxfordian contention cannot currently be regarded as credible.

3. Oxford's candidacy is supported by no evidence whatsoever. After 100 years of occasionally extreme effort, supporters of Oxford's candidacy have nothing to offer but supposition, inference and deduction. Many Oxfordians have even tampered with evidence to improve its usefulness, such as Ogburn's distortions of Puttenham's work. To date, however, not a single item of hard evidence exists to support the idea that Oxford wrote for the professional theatre. Outside of the normal bounds of flattery and noblesse oblige, there is almost no evidence that Oxford wrote anything other than dismal poetry and perhaps an interlude or two for court performance. The Oxfordian explanation is that his authorship was covered up by a secret conspiracy. Like many conspiracy theories, it contains many obvious but unanswered questions. This kind of wild conjecture is completely unacceptable without at least some hard evidence to tether it to reality. And there is none. As in absolutely none at all.

4. Oxford's writing and use of English eliminate him as a candidate. There is no evidence of genius or even much talent in any of his writing. Although Oxford's candidacy was based on the stylistic analysis of Looney, Ogburn and Sobran who identified 'the germ' of Shakespeare in Oxford's writing, all subsequent analysis, especially the computerised stylometry which began in the 1990's, has completely and definitively ELIMINATED Oxford as a potential author of Shakespeare's work. Extensive batteries of tests statistically confirm that there is no chance that the author of Oxford's undisputed work is also the author of ANY of Shakespeare's work. An effective probability of nil. It is debatable whether science is actually needed to prove this. Oxford is obviously not Shakespeare. He is almost a stranger to metaphor and lacks any of the delicacy of expression and imagination that is everywhere in the canon. Looney, Ogburn and Sobran were mistaken in their impressions that the work of one man could be detected in the work of the other. These supposed stylistic similarities are the foundation of the Oxfordian contention. In the absence of more recent and more stable foundations, the Oxfordian contention cannot be correct.

5. Oxford's education and birth do not give him an advantage. There is no elite knowledge of court life or the law in the plays which Oxford could have acquired and Will could not. In fact, only Will's last play, Henry VIII shows any detailed and accurate knowledge of life at court. Were the plays written by a courtier, they would be very different. Oxford did not study at Cambridge, his degrees were honorary decorations, awarded to him as part of a group of courtiers, accompanying the monarch on tour, nor is there any evidence that he studied at Gray's Inn. In his letters, Oxford's legal latin contains basic mistakes and his prose contains eccentric fenland expressions which do not appear in Shakespeare's work.  In 100 years of argument and discussion, Oxfordians have not been able to produce any examples of elite knowledge or any knowledge based on education, background or sources which make Will's authorship problematical. The argument even rebounds on them when they are asked to explain the detailed knowledge of the wool trade or the glove-making industry or detailed references to life and around Stratford on Avon such as that to 'Joan Hackett, fat ale-wife of Wincot'.

6. Oxford's background makes his authorship more unlikely, NOT more probable. Shakespeare's background and education were certainly not atypical of playwrights of the era; we know more about some, less about others, some were better educated, some worse, some came from better upbringings, some from worse. However, none of the playwrights writing for the professional Elizabethan theatre were aristocrats. It is a very unlikely pastime for a courtier, even though many of the plays were performed at court. The Elizabethan professional theatre was the first creative meritocracy where aritistic work could be judged on ratings, where money could be made from popularity rather than reputation. Where failure could be be greeted by a blow to the head from a flying cabbage instead of a sympathetic shoulder to cry on. Not a pastime for amateurs. Aristocrats with literary ambitions confined them to courtly audiences and steered well clear of audiences that had just wandered over from the bear-baiting.  Shakespeare's competitors, however they were educated and whatever evidence they left behind, were all commoners.

7. Oxford had no experience of the professional theatre. Playwrights and actors of the time were commoners, working under contract for money, not aristocrats. We even have details of the hierarchy and their Terms and OCnditions from Ned Alleyn's surviving documents. It is unthinkable that an actor could be either illiterate or an an aristocrat working anonymously. And Will was definitely an actor and one of the best. Apart from his patronage of two minor groups of players, Oxford had only slight connections to the professional theatre and none at all to the Chamberlain's/King's Men, no theatrical training of any kind, or knowledge of stagecraft both of which are necessary for writing plays. The later plays, "Henry VIII" and "The Tempest" for example, have extensive stage direction for special effects, costuming, and entrances that would require a working actor's knowledge. The plays themselves are replete with references to acting and playing a role on stage. The craft takes time to learn. Experience of being on stage would have been essential. Oxford had none.

There are, of course, many more than the seven reasons given here which confirm the impossibility of Oxford's candidature as the author of Shakespeare's work. Occam's Razor, all things being equal, favours the solution with the fewest hypotheses. Shakespeareans have one hypothesis. The man whose name is all over the work and to whom it is attributed by his contemporaries, is the man who wrote it. Oxfordians have hundreds of non-interconnecting hypotheses.

The 400th anniversary is a suitable occasion for getting rid of his fundamentally flawed and provably untenable claim.

It's time to say goodbye to Edward de Vere. 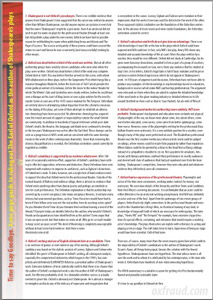 The Shakespeare Birthplace Trust's Free Book on the Authorship question 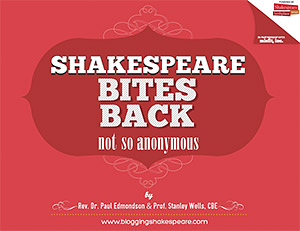