Is this a dagger?

Is this a dagger? 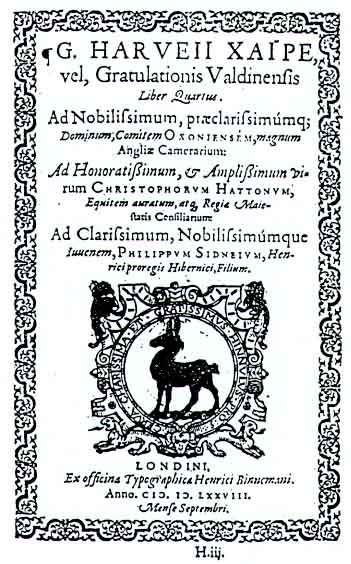 Gabriel Harvey had a similar background to Will. He was a scholar and writer, born at Saffron Walden, Essex, the eldest son of Alice (d. 1613) and John Harvey (d. 1593), a yeoman farmer and master rope maker who was a prominent member of the town's corporation. Richard Harvey and John Harvey were his younger brothers. Gabriel was educated first at Saffron Walden grammar school (no enrolment records again) and graduated ninth in seniority in the BA class of 1569/70.

He was a close friend of Edmund Spenser, a letter to whom contains the first mention of The Faerie Queene and a collector of books, whose margins he filled with comment but whose existence he omitted to include in his will. Distinctive beyond doubt, the whereabouts of 180 of these books are known today. A humanist, a dedicated protestant and possible author of the Martin Marprelate tracts, he is known today mostly for a bit of Latin flattery bestowed on the Earl of Oxford in 1578.

Why? Because a mountain of speculation the size of the Himalayas has been built upon a few extravagantly imaginative translations of three words of Harvey's Gratulationis Valdinensis.

'Thy countenance shakes a spear' is the Oxfordian translation which, they argue, Oxford remembered ten or twelve years later when the choice for pseudonym cropped up.

This is a game of authorship probabilities.

Now, before we look at what Harvey may have actually said, should we perhaps calculate the likelihood of Oxford translating the one into the other and being so impressed, that it came to mind as the obvious name to conceal his identity from a prying public? After a gap of possibly 12 years? Would he not, perhaps, have chosen a variation on the original Latin, rather than a translation no one made at the time? Could Hamlet have been written by 'Telavultus'? Or might the Italian Earl have fancied 'Vibratella'.

Like the idea, the translation is nonsense. Of course.

Harvey started with English in his head, as even grammar school boys do, and translated his phrase into Latin. We have the Latin words for 'face' or 'expression', for 'a thrown weapon' and for 'shake' or 'brandish.' Harvey may have meant 'your eyes brandish spears' or 'your look darts arrows' but you won't find those phrases anywhere in common usage at the time.

So do we really have to look any further than the common phrase to 'look daggers'? Shakespeare, shying away from hackneyed usage, bends it into something new but Dekker gives us something very, very close to what Harvey must have started with:

If you want to translate 'thine eyes shoot daggers' how much closer can you get than Harvey's Latin version?

Yet there is hardly an Oxfordian site or book anywhere that does not confidently, triumphantly even, link Harvey's three words of Latin to the identity of playwright, probably 12 years away from his first première, on the basis of an improbably rococo interpretation of a simple, undistinguished, conversational Latin phrase.

As for Harvey, two years after his encomium he was hard at work lampooning Oxford as the worst kind of lily-livered, womanish wastrel. Out of Oxford's earshot and away from the court, all chance of preferment abandoned, Harvey took Leicester's side in a quarrel between the Earls and his sarcastic verse is dripping in contempt for Oxford's Italianate, limp-wristed foppishness. It's in English this time but echoes the form of his earlier effort.

No words but valorous, no works but womanish only,
For life Magnificos, not a beck but glorious in show,
In deed most frivolous, not a look but Tuscanish always
His cringing side neck, eyes glancing, physnomy smirking

Oh dear! The countenance that once shook spears is now caught smirking and cringeing. No works but womanish. This is much more like the Oxford that biographers describe. Whilst Harvey was forced to backpedal and apologise, Nash was to continue rubbing the noses of both Oxford and Harvey in this little pile of dirt for years to come.

he interlaced his short but yet sharp judicial of Eathequakes, & came very short and sharp upon my Lord of Oxford in a rattling bundle of English Hexameters.

Harvey's address is no more than a massively overstated, totally insincere bundle of fake praise, especially that which compares an Earl who has wasted his fortune on gloves and hose, with one of the greatest humanists of the age which is allied a carefully barbed description of the 'glory which will spread out from the Arctic Ocean' (snigger-think about it!). The whole would have had the intelligent listeners pinching themselves to suppress a smile. And by the time he got to 'putting down his feeble pen', the urge to snort with open laughter must have been uncontrollable. Alexander Pope would have loved it.

Hard to see how Oxfordians dare to draw attention to it.