Is the work of the early Elvis Presley, making recordings for Sun Records in the mid-50's, distinguishable from the work of the same singer in his recorded concerts of the mid-70's?

It's a difference of 20 years. The difference between early Beatles recordings and their final work is less than 10 years. Looking at Dennis Potter's early work in the sixties and comparing it with his work 20 years later is even more instructive. Very few people would want to admit they could not tell which came first, Vote, Vote Vote for Nigel Barton or The Singing Detective.

In the 16 years between Steven Spielberg's Close Encounters, with its off screen aliens and Jurassic Park with its very much on screen dinosaurs, computers had become big enough and powerful enough to be used for origination.

The professional theatre, in the 20 years Shakespeare was active, changed at an almost equally rapid pace as music, TV and film did between the 1960's and 1990's. You can make a science of dating any kind of art but when rapid development is happening around it, you don't always need much science to get things in order. Even at the most elementary level, dating doesn't have to be guesswork. 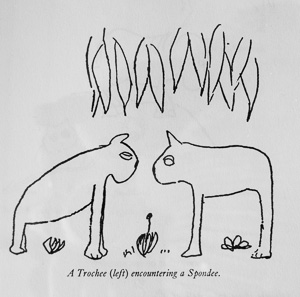 The weakest part of the Oxfordian argument, since the Earl died in 1604, is that it simply cannot account for the progressive changes that took place in theatre between the opening of the first professional playhouse in 1576 and 1611, the year the Tempest was first performed. Plays written at the end of that period are nothing like the plays written at the beginning, In 1611, the stage, music, language and the theatres themselves had changed in a revolution throughout which De Vere had mostly been dead.

And there is proof.

'Oh no there isn't' cry Oxfordians 'Oh yes, there is' reply Shakespeareans (and Marlovians, Baconians, Nevilleans and everybody else).

Yardsticks exist for measuring the change. The increase in feminine endings, the relationship between stressed and unstressed syllables, rhyming patterns, the density of imagery can all be measured and compared. You can use these metrics to chart the differences between authors and identify the years in which their works belong. It may not be as exact as carbon dating. It may leave room for limited argument, but you can use analysis of metre to produce charts which are consistent with everything in the history of Elizabethan and Jacobean drama except the idea of Shakespeare dying in 1604.

But the Oxfordians will not look. Well, actually they do look. Some of them look and some of them produce rebuttal documents. Then come rebuttals of rebuttals like this one from master stylometrists Elliot and Valenza (the funny bit where they turn stylometry onto their Oxfordian critics starts on p154).

Nowhere in Oxfordland, when discussing poetry, metre and style, can anything approaching consistency be found.

Looney and Ogburn begin by claiming to detect stylistic echoes of Shakespeare in Oxford's work. However, since stylometric comparison completely eliminates Oxford, it has to be declared offside. The countering idea is that all of Oxford's undisputed work is juvenilia. Dating the Elizabethan and Jacobean plays shows a stylistic development consistent with the accepted chronology, so the whole science of stylometry is therefore declared suspect.

Stylistic comparison using methods with which are acceptable to everybody (except a few hard-headed Oxfordians) shows a progression in Shakespeare's work which follows the development in theatre to a point long after Oxford was dead.

And couldn't have written the last 10 of Shakespeare's plays.